There is a flaw in nature’s strategy, a bug in the system, if you like. Settling down with the first person we fall in love with and staying bonded would not help spread our genes. Spreading genes is Nature’s number 1 priority. Our individual happiness does not figure in the plan. So almost all mammals, including us humans have a built in, ancient mechanism that scientists call The Coolidge Effect. It operates to make us seek out ‘novel’ mating partners when our fertilisation job appears to be done. It works by building tolerance to, or boredom with, the same person or stimulus. |Over time their presence becomes less ‘rewarding’ to the primitive brain. Over time we just have less and less desire for the same sexual partner. 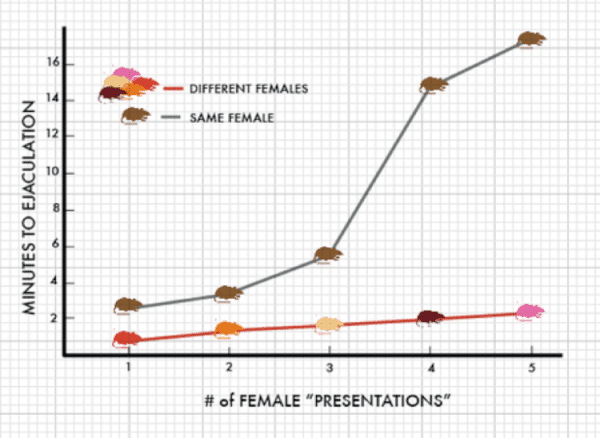 Farmers know this too as bulls will only mate with a cow once per season. They will seek out new cows in the field in order to fertilise the whole herd. This ancient programme to spread as many genes around as possible, does not fit with our more civilised lives today. We want to bond and stay committed for as long as possible. Religions and societies have used all kinds of strategies to get round this bug – allowing men more wives, marrying them off young and encouraging big families to keep them busy, and turning a blind eye to mistresses etc.

It is this flaw in our biology, the Coolidge effect, that has allowed the internet pornography industry to mushroom into a multi-billion dollar business. As soon as a person has ‘fertilised to satiety’ an apparently willing sexual partner, they will stop. This happens even if it is just an image of one. Then the brain produces less “go after it” dopamine and hunts around for new fertilisation opportunities. With around 10 million porn videos consumed in the UK alone every day, there is no shortage of apparently willing mates. All this goes on at an unconscious level but affects everyday behaviour none the less.

The good news is that we don’t have to be trapped by The Coolidge Effect. We humans are smart when we put our minds to it. By learning to reduce the effects of too much dopamine in the brain and redressing the balance with more oxytocin thus reducing stress levels too, we encourage more loving bonds and connection. These are sustainable and help us flourish both individually and together. For more information on this we heartily recommend this website is www.reuniting.info.